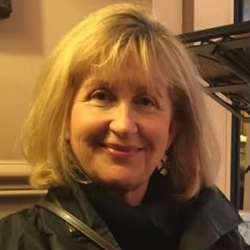 Member, CTAC Board of Directors

Jennifer Tobias currently resides in Chicago, IL and on Old Mission Peninsula, MI. She maintains art studios in both places, and her painting reflects the experiences of living on both sides of Lake Michigan. Originally a South Dakotan, Jennifer lived in Michigan for 32 years, practicing law and owning retail home and interior design stores. She has previously served on the Women’s Resource Center Board in Petoskey and on the Women’s Board for the Lincoln Park Zoo.

"As the mother of four children, all of whom graduated from Petoskey High School, CTAC served as a community resource for my family. My youngest child was very active in theater, and the memory of him in “The Christmas Schooner” and as the “Hare,” diligently running in slow motion around the entire theater perimeter, are among my happiest at CTAC. We also availed ourselves of art classes, art exhibits, family New Year’s Eve, film offerings in the Carnegie and Swirl. The arts give us a way to nurture and express our souls that is positive, connective and vital to our well being as humans.I look forward to helping CTAC-Traverse City expand and grow in the coming years.”