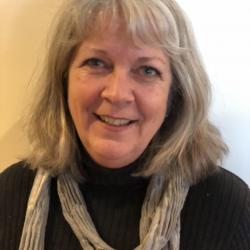 Nancy McRay holds a Master of Fine Arts degree from the University of Michigan with an emphasis on Fiber Art. She has worked as a studio artist and community arts organizer since 1994.

While in graduate school, McRay curated and organized a national traveling exhibit, “No Man an Island”. The theme of this show was the interconnectedness of American communities. The prospectus called for art related to each artist’s community, that had some relationship to issues around the USA. This traveling exhibit grew out of a workshop at the Anderson Ranch, Snowmass, Colorado,  led by performance artist Suzanne Lacy and art critic Suzi Gablik. All of the workshop participants hosted the exhibit in their own home towns and made art related to their own towns’ challenges.

In 1999 McRay organized and curated  “Toward The Millennium”, an exhibit of site specific installations in locations throughout the City of East Lansing, and the Michigan State University Campus. McRay made the call for artists, secured the funding from local and state organizations, secured the venues and matched the venues to the 10  accepted artists.

In 2000, McRay, and two artist friends, Leslie Donaldson and Susan Hensel, opened a contemporary art gallery in downtown East Lansing called “The Art Apartment”.  Each month, one of the founding artists would transform the space into a new, site specific, time limited installation. McRay’s exhibits included “The Great Felt Lakes”, “Bridge”, done in collaboration with a group focusing on end-of-life issues, and “The Weaving Room”. The Weaving Room generated an article in Fiber Arts Magazine in Fall of 2001.

After moving to Williamsburg, MI, McRay continued her involvement with local arts  on the Board of Directors of Art Rapids as the Education Committee Chair, working with Shanna Robinson to curate a Fiber Show for the Jordan River Arts Council  October of 2018. Robinson and McRay are working together on another exhibit for JRAC in October of 2020.

McRay is a member of the Greta Project: Growing Responsibility for the Environment Through Art.  The “Invasive Species” project was well received at the Glen Arbor Art Center, and continues to be exhibited around the state. Their newest venture will explore climate change.

An award winning Fiber Artist, McRay’s current works are with Tapestry, Rigid Heddle Weaving and compound weave structures. She enjoys branching out to other media including print making and pastel painting as a way to “cross train” and enlarge her skill set.